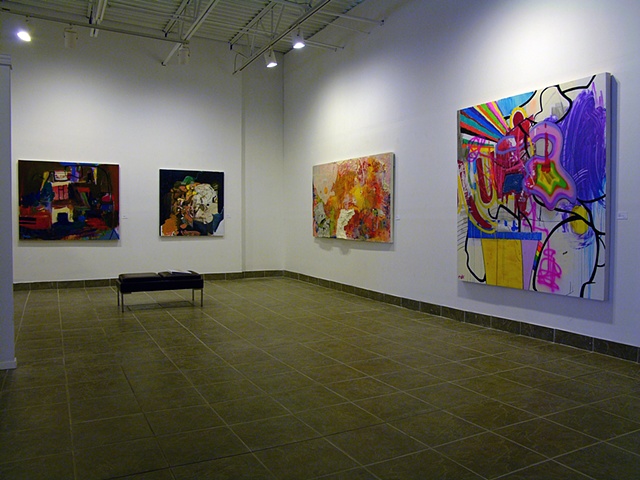 The first exhibition I saw at Cohn Drennan Contemporary was of Cande Aguilar's, and at the time I remember having thoughts about subtle mixtures, loose combinations, and unlikely bed fellows like Winnie the Pooh and Matisse all smoothed into a canny sauce. So when I heard Cande was curating a show, I was interested to see what he was cooking up. The show is slice (May 21 - July 2, 2011), and features Michael Blair (Denton), Jesus De La Rosa (Kingsville), Jorge Puron (EaglePass) and Cande (Brownsville). There is something intriguing about the idea of revisiting abstract expressionism as if it were a sort of mad old imprisoned being whom one might discover accidentally while mining for chickens, or something, ala Monty Python, to find it still ravingon in wild solipsist vortexes of private visual syntax some how befuddled by the advent of pop, and / or, anything less than the existentialist sisyphean melodrama. That Or something might be inevidence here. If we look at the title piece of the show, Cande Aguilar’s self-titled slice, we can see what is in effect a truly contemporary hybridization of styles which could be called pop expressionism, or abstract pop, or graffito salsa for that matter. The image itself could be a back alley tag figured as a banana split whose smell is a rainbow, and whosecherry-on-top might be Count Dracula in his muscle red armor. This piece signals a fun, happy, associative theme which connects andunites the show. On the other hand, though, Michael Blair’s pieces, like Untitled 3-1, and 2-3 while ostensibly more visually sombre seem to perform almost a bass-line in the show’s over all referential fuzz-box, bringing in things like Duchamp’s Chocolate grinder, Sir Arthur Evans’ Minoan "Horns of Consecration," Mid-Century Modernism,and perhaps a minor key note for the collective styles of these artists, Albert Oehlen. There seems to be, at least in Blair, some definite arcing to the Neue Wilde movement in Germany. In Jesus De La Rosa’s work Utopia Almost, I found a deep homage to process but a process whose result somehow arcs between director Byron Haskin’s 1964 Robinson Crusoe on Mars and Max Ernst’s epic frottages like The Eye of Silence. All of the works seem chatty in various ways. Jorge Puron’s Sexiest Elevator evokes memory and subtly approaches an abstract landscape through an urban lens which evokes a wryly reflexive subject matter. Are we looking at a painting of a little store front in some anonymous south Texas neighborhood? Is the elevator that penetrates the roof and continues up into the huge unlikely billboard a top its roof somehow akin to the artist’s aspirations? It is an odd, dark question, and it seems to be put to you by a swatch of cloth cut from a hammock. Sexiest Elevator, for me, had a second title, namely black humorsiesta. These were, more or less, the kinds of thoughts I had as I looked at the show. When I asked Michael Blair what he thought, he seemed to feel that there was still a lot of baggage to this kind of painting. I thought to myself, I like an artist who's wary of what he is doing, but for some reason, I wasn't very wary. I immediately embraced the show, and it felt like something closer to Jack Bruce and Ginger Baker jamming, than to clearly defined art-historical categories. I could see sci-fi, and neo-geo, and graffiti, and pop, and just really a sort of free-for all orchestration of materiality that ended up looking like an avatar of the title, namely slice. As if a wide swath of recent art historical styles and precedents, or some of them anyway, and discourses, had been thrown together willy-nilly in a big torta sandwich made like a pie, and then cut in different places to reveal the gooey weird contents. For me, the show ended up being more about savor and sapidity, or sabor, than dry category. And since they say that Painting will never die, then I suppose what the old Ab-ExPop-wild monster in the cave was cooking up was edible zombies, Frankenstein confections that wink and snicker and just start talking to you like an old friend...