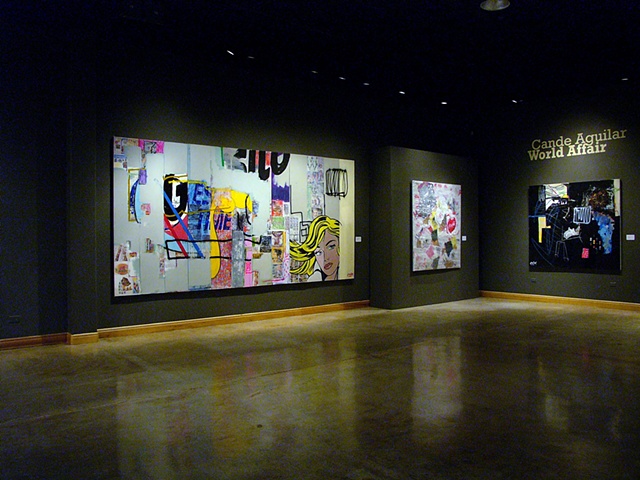 Do you expect art to be informative? Are you occasionally surprised when the artist actually has a message and communicates it well? Brownsville artist Cande Aguilar does just that with his new exhibit, "World Affair," currently on display at IMAS.

Aguilar has shifted from his earlier topics that primarily reflected his immediate surroundings. In "World Affair," his commentaries of the human condition become broader. He engages in social commentary on a universal or national issue. The canvases are large, often requiring multiple five and six-foot high panels, intermingling his realistic and abstract elements on a grand scale.

"With this collection," said Aguilar, "I decided to work with materials and themes that represent our actions as human beings." Aguilar believes that people world-wide are having a similar dialogue - whether it is about being a pop star, going green, or even about their spiritual beliefs.

The large, multi-paneled painting, Everybody Wants to be a Pop Star, uses an appropriated Lichtenstein image to establish the desirable, idealized, pop glamour image. Transferred images of magazine covers form a linear pattern to her left. An assortment of popular images including suggestions of billboards and graffiti are scattered about the picture plane. They are all unified, yet isolated, by a field of gray brushstrokes.

American Capital is Aguilar's impression of the US government under the Bush administration. The institution, represented by the building itself, is slowly sinking in a strawberry parfait of greed.

Almost overlooked in this bold exhibit is one of the strongest statements, $74. Located at the far corner of the gallery, it is a small video, ingenious in its concept. It represents the things we humans do over and over that are not good for us. "This is portraying John Lennon, Abraham Lincoln, Mahatma Gandhi, and Martin Luther King," Aguilar explained. "These are people who keep getting crucified. It's just like Jesus is being crucified over and over through each generation. These are people who come in and tell us a little bit of the truth. I focus on the fact that man keeps destroying our Truth-Sayers just as if Christ keeps returning and is repeatedly crucified."

Other paintings that represent our actions as human beings include Past the Shock and El Sueno de la Mariposa. These two speak about the survival of the soul. Texas Tea and Untitled (wrapped Plastic Bags) are set to trigger a dialogue about waste and consumption.

In "World Affair" Aguilar extends his style of combining realistic and abstract elements, using collage and transfers when the need arises, and above all, using urgent brushstrokes to bring the whole image to life.

Definitely plan on seeing this exhibit.