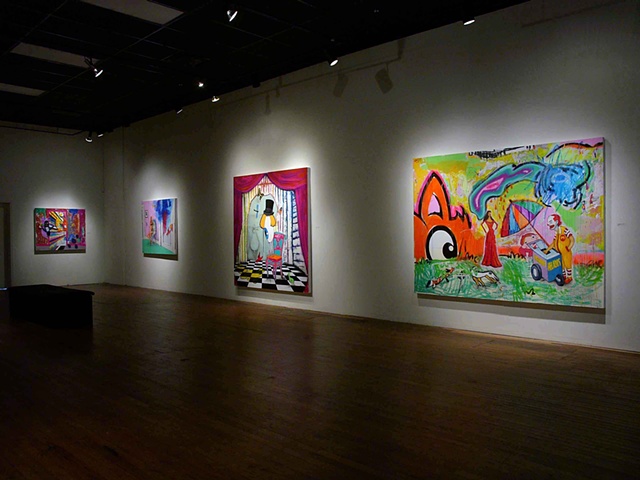 His current exhibition of these Technicolor works, latex Suites & Gardens: Memory and consciousness, is on view at K Space Contemporary through June 24.

Born and living in Brownsville, Cande Aguilar, Jr. is an exceptional contributor to the Rio Grande Valley art scene. Michelle Smythe, Director of K Space Contemporary, says Aguilar uses random subjects to create cohesion in a defined space. "He extracts from anything around him, including history, in order to tell his story in the form of abstract representation. Lighthearted joy, bright colors, and sensitivity permeates his work; such that, a recent exhibition is a direct contradiction to the issues relating to the ongoing border violence in South Texas," Smythe explains.

Aguilar says he is a studio artist with sources for his materials and inspiration coming from the streets and highways.

"The windshield of my vehicle is like a portal which allows me to capture bits and pieces of the passing landscape," Aguilar said.

In his recent painting, Cosmo, Aguilar skillfully creates the illusion of three-dimensional space using traditional techniques of perspective, shading and layering. At the same time, he artfully weaves in modernist approaches to the painting surface, such as bright and flat colors, as well as cartoonlike, imaginary characters to create abstract forms of representation.

Aguilar says his mixed media technique opens the doors of dimension, allowing him to abstract from the primitive, modern and contemporary state.

In this work a black and white tile floor leads our eyes to a sketched urinal appearing to reside on a wall far from the viewer. At the same time, the butterflies and odd creatures — including the two-legged, top-hat wearing eyeball standing on a chair that seems to come from an entirely different work — visually pop off the surface of the work toward the viewer.

At first glance some visitors may feel the work to be disorganized chaos. After some exploration it is clear there is purpose and intention residing within the work. Like each viewer choosing to live each moment in presence and with intention, Aguilar encourages us to experience his work with sensitivity.

"As an artist, it's important for me to give the viewer the opportunity to become one with sensitivity. In time, this art will reveal a truth that conveys an existence that is unique to our world in the 21st century," Aguilar says.

With a blend of serious yet playful ideas and images, viewers of all ages will gain insight not only into techniques for expressing themselves, but also into a limitless range of characters and realities.

Elizabeth B. Reese, Ph.D. is an independent scholar, critic, consultant and a visiting professor at Texas A&M University-Corpus Christi.