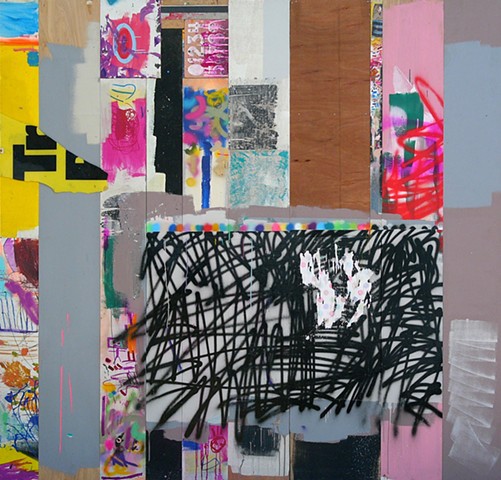 Cande Aguilar: by ivan xavier ramirez/ beyond arts magazine December 2014 Brownsville, TX. Pop. 181,000, home to Rutledge Burgers; a miniscule enclosed burger stand nestled in the heart of downtown where Cande Aguilar takes me on a rare chilly November day. In business since 1924 the place is so narrow two people couldn’t fit side by side. Also it’s the only burger joint I’ve been to that doesn’t offer French fries, (huh?) only a bag of chips which you’re free to grab yourself. Brownsville was also the home to one Julian Schnabel, one of modern arts most successful living painters and filmmakers. Cande is well aware because he knows his town; he knows which places have the best burgers, which alleyways with their decades old peeling paint and expected neglect provide the best backdrops for his paintings to be photographed against, (an ongoing photo project of his.) I was privy to this knowledge as just a few minutes before our lunch we were shooting in nearby alleyway. The beauty of urban decay and the vibrancy of his abstract art seem to make a perfect match. It both blends into the landscape and heightens it. Later when I talk to Cande in his home, surrounded by large scale works of his and many others he has had the fortune to trade with he tells me about his past and current projects and upcoming plans. Currently he is excited about an upcoming group show in New York City at The Painting Center, and rightfully so. New York is the epicenter of the art world and its thriving market. It is the biggest stage, and perhaps the hardest to penetrate. But one small painting in a non-profit gallery meant to showcase emerging and yet to be recognized talent is a great step in the direction Cande is aiming to go. And as this is being written, works by art luminaries new and old are commanding record breaking prices at auctions, and it’s not slowing down. The market is voracious. Primarily an abstract artist, his work is often large in scale and an explosion of color. Large swathes of paint, scribbling in pastels, spray paint, acrylic, mixed media and found objects, all find their way onto his canvases and boards, a hodgepodge of tools communicating a singular vision honed after many years at his craft. You see nods to pop art (Warhol), particularly in his use of brand logos and found advertisements, and a definite appreciation (assimilation?) of graffiti as an urban art form. One of his older series, Barrio Pop was a perfect example of this fusion. Without any training or formal schooling in art his work has been exhibited in the top museums and galleries in the region. What started by sketching and making small still life paintings in 1998, around the time the Tejano band he founded and played in for eight years after high school split up, became a livelihood after finding inspiration from his newborn daughter Sally Marie. “Abstract (art) wasn’t something that came easy to me. I didn’t want to do an abstract painting just because I wanted to splatter some paint around. The way it happened for me was when my daughter was born, our first born Sally Marie. After being a month old I started looking at her eyes and the way they would just look around. I started thinking she doesn’t really know what she’s looking at. She’s just looking at shapes and colors. So through her eyes I can see every time she pauses to look at something to her must be like looking at an abstract painting.” This would be the defining moment that gave Cande new eyes as well. “In my mind it all came together and organically it made sense to me, that’s what abstract is.”

Since then he has shown at Galeria 409, Brownsville Museum of Fine Art, IMAS, , and most recently curated and exhibited a show at the Beyond Arts Gallery in Harlingen. Right now he is excited about an upcoming group show at The Painting Center in New York City - and rightfully so. New York is the known epicenter of the art world and its thriving market. It is the biggest stage, and perhaps the hardest to penetrate. But one small painting in a non-profit gallery meant to showcase emerging and yet to be recognized talent is a great step in the direction Cande is aiming to go. This will be his first work to show in NYC and also the first time he has had to ship one of his paintings to be included in a show. Also in the works is an exhibition in the spring of 2015 in Denver, Colorado along with some internationally known artists. “I want the serious collectors,” he tells me on the way to lunch. He stresses the importance of having a strong body of work that communicates your vision. “For me after every show something changes. With this show (Facture) I learned I have to work and turn it into one thing. One vision.” I ask him if he thinks that one’s vision, their uniqueness that separates ones work from another is the most important thing for someone wanting to make a career as an artist. “At least it’s a starting point to evolve. But the artist has to make a whole body of work that represents that time in your life.” When asked what he would like to tell aspiring artists he says to keep pushing at it, to keep dreaming. “If you keep envisioning your work in places where you want it to be, eventually it will come through. Don’t second guess yourself. The more you second guess yourself the longer it takes.” To all artists he says it’s important to become part of the art scene, whether it’s in the area you live or in another city you might wish to exhibit in. “Go to art shows, make real connections with people. Make yourself accessible and easy to work with.” Cande’s artwork is now in the collections IMAS, Brownsville Museum of Fine Art, Wichita Falls Museum of Art in North Texas and the University of Texas San Antonio. See his work at www.candeart.com